I’m one of those people that can only eat meat by never thinking too hard about where my food is coming from. So, when the abattoir truck changed it’s morning route and started going by my home I was pretty distressed. In this case it’s pigs, and you can smell the truck long before it arrives and detect it long after it’s gone. It smells like fear and filth, pervasive and intense, and it’s made a huge impact on how I think about what I eat. As it happens, Tito turned out to be working with a highland beef farmer – a wonderful lady named Kim. Kim put out an open invitation for us to visit her farm, and last Saturday we took her up on it.

The farm is called Gryphon Ridge Highlands. Here is their Facebook Page. The farm is incredible – Kim is a tough, friendly, hard working gal who works 2-3 jobs outside of the farm – just so she can keep it running. The animals there are more like pets, following her around and nuzzling her every chance they get. They’re in love with her, and it’s mutual.

This is Wilbur – he’s a pet rescue pig. Wilbur came from an abusive farm and is now in his ‘forever home’. He’s shy, but is not afraid to come bother you for a petting.

This is muddy guy is my new friend Eddie. Eddie is a miniature horse, white with blue eyes. There’s nothing quite like snuffly horse-kisses in your ears ;) 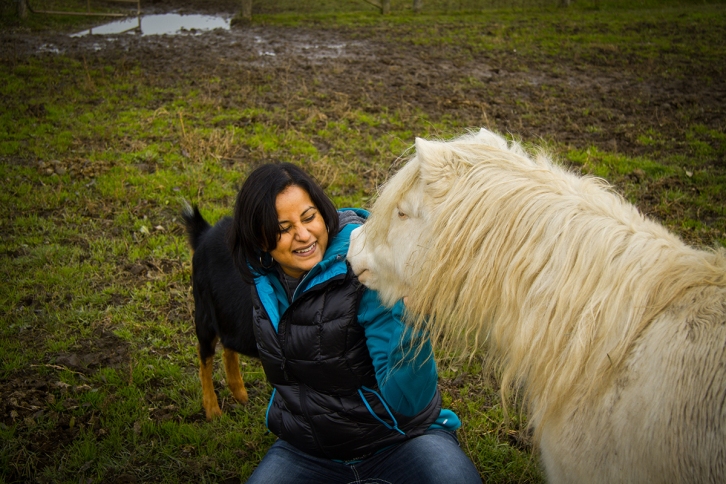 Kim has a pet goat named Diesel (so named because it’s hard to start her up on cold mornings) Diesel is obnoxious and awesome. She was bottle fed as a baby and is more dog than goat – following us everywhere and trying to play. 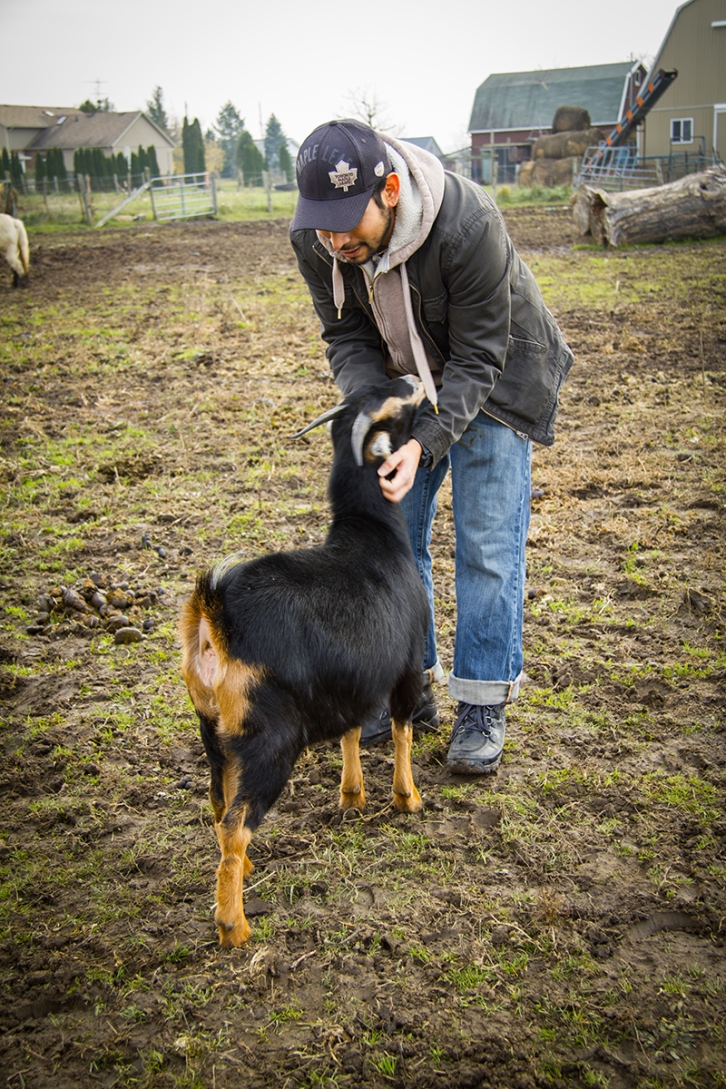 This is Buckie – Buckie is Kim’s bull, and she’s had him since he was a wee thing. He is so in love with her that he tries to nuzzle her as though he were a cat – it’s like being nuzzled by a wrecking ball. He is gentle and sweet and nothing like how I imagine bulls.

There are chickens, 2 more horses, a dog and a cat. Of course, there are also a bunch of cows, and some babies! 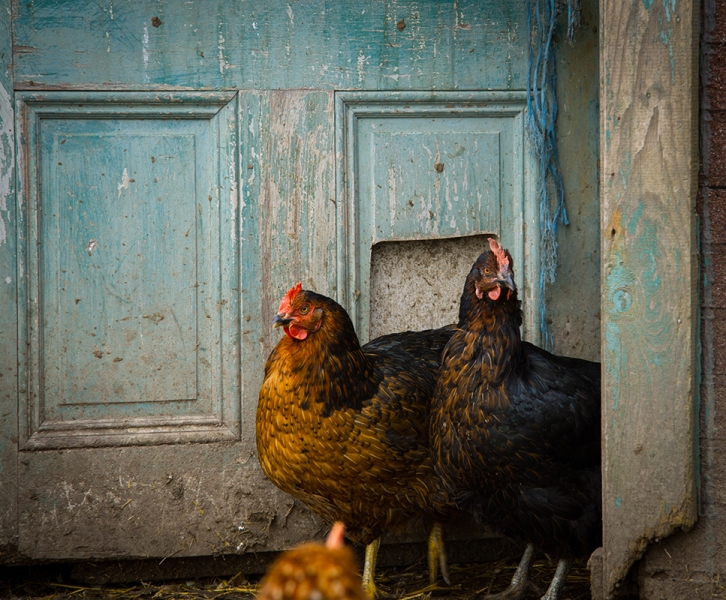 Kim’s cattle are raised naturally – they eat hay and mature in their own time, taking years to be ready for the abattoir (she never produces veal). She shows them regularly (and with great success) so they’re used to being comfortable in trailers and with travelling. When it’s time, she makes an appointment so there is no line up, her cattle don’t wait in holding pens, and they don’t have to hear or sense anything distressing. At the last she walks them in herself, and closely examines the abattoir to make sure that everything is fast, efficient, humane, and the cattle never know what’s happening. And she cries, that part really got to me, for each cow.

I asked her if any of the cows on the farm right now are destined for food – she blushed and confessed that they’re all pets at the moment, hopefully destined for shows, and if sold, as pets to other homes.

Having said that, she does send a few cows a year, and we bought a dozen eggs, a huge roast, and 4 top sirloin steaks from her. The price was much, much less than we pay at a grocery store, for high quality, naturally matured, humanely treated, hormone-free, lean beef.

I have never been much of a cook. I am planning on sharing my food adventures via the blog as I learn to prepare these foods over the Christmas season. Tito and I have decided to buy our meat from Kim, and to start learning to eat local. We will be trying to support our local farmers, eat in an environmentally sustainable manner, and be good to our bodies while we’re at it. I’m sure it’ll be imperfect at first, but I’m looking forward to the culinary adventure, and to many more trips to the farm! 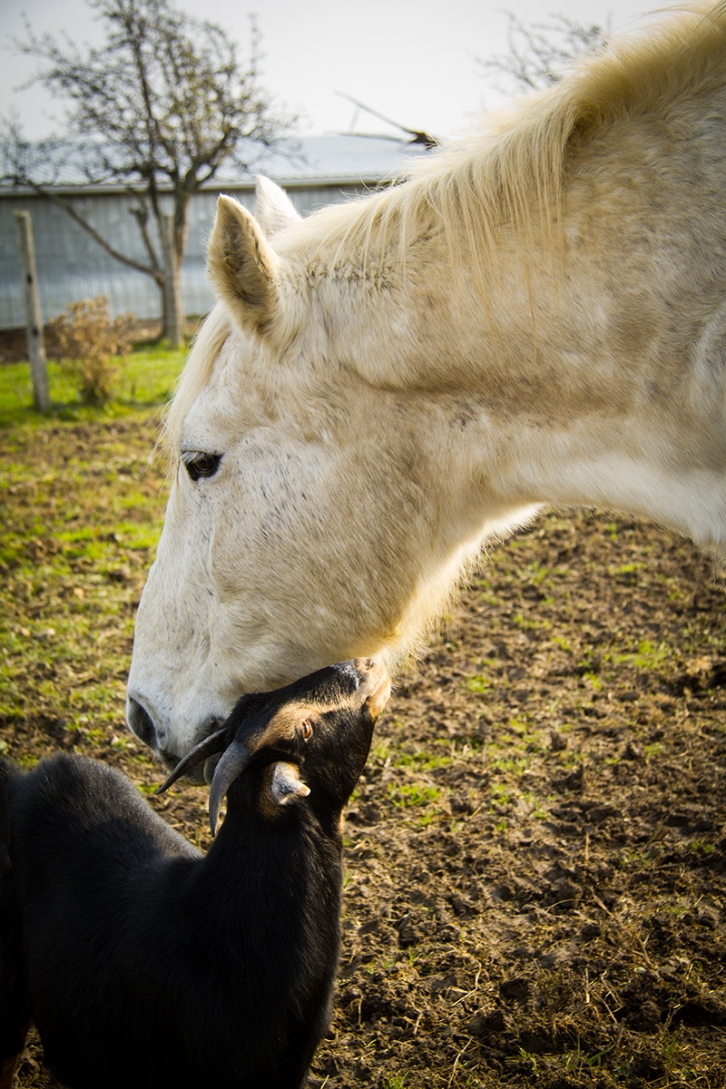